In 1902, East Scotland provided the location for the annual Miller’s Convention and the mills visited were described in detail in the May 31st edition of Milling, the ancestor of Milling and Grain, soon to reach its 130th anniversary. This is the fourth in a series of five articles based on that information.

The Junction Meal and Flour Mills, Leith Last month when discussing the Scottish Co-operative Wholesale Society Chancelot Mills, I mentioned that in 1901, together with their Junction Mills, they delivered 325,819 sacks of flour together with a weekly output of 550 sacks of oatmeal.

The oatmeal was produced by their Junction Mills in Leith. The Society bought the mill in 1897 from John Inglis & Sons in August 1897, when it was originally known as the Midlothian Oatmeal Mill. This mill, having been purchased rather than erected by the SCWS, lacked the ornate appearance of their other buildings. 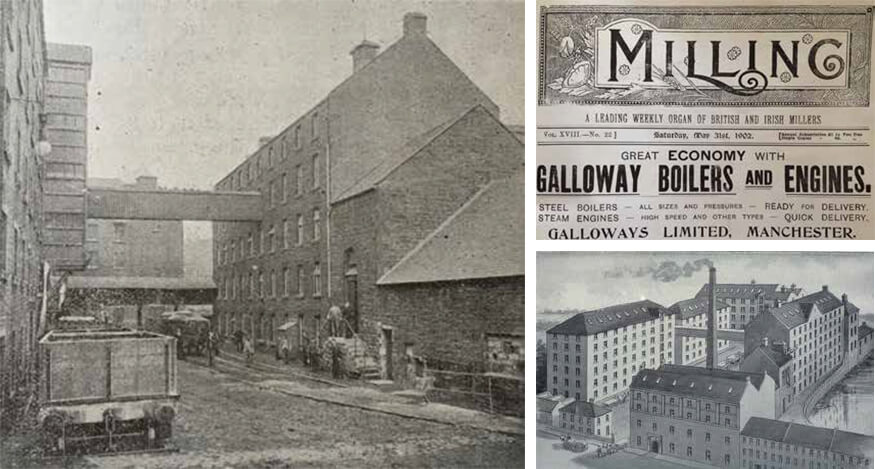 Although the mill could produce 12 flour sacks-per-hour, it was initially intended just to produce oatmeal and it was soon producing 700 bags of oatmeal weekly. By 1907, the milling plant had been expanded and it was expanded again before the First World War. By 1914 the mill was capable of producing 28,427 sacks of oatmeal; this figure had increased to 46,444 sacks in 1918.

The mill was reconstructed in 1939, designed by the SCWS Architectural Department and Walter Underwood. It ceased milling and was demolished in the 1970s when the new Chancelot Mill was built.

The Junction Mills were situated on the banks of the Water of Leith, adjacent to the docks. The flour plant was by Henry Simon, with 14 double 32x40-inch rolls, five dustless purifiers and 24 centrifugals. It was set up as a four-break system, and the scalping performed on reels for the first two breaks and horizontal double centrifugals for the third and fourth.

The cleaning plant was also erected by Henry Simon. The power plant consisted of two Galloway-tubed boilers fed with a peculiar style of stoker in the form of a screw which fed the coal upon the fire all down the centre of the furnace.

The new engine was made by Douglas and Grant, a popular Northern firm of the time. The flouring plant made 12 sacks-per-hour and was kept working night and day on Spring wheat alone.

The Society’s oat meal plant was in a separate set of buildings, and was completely equipped with modern machines. The Mill was in the hands of Mr WF Stewart, assisted by Mr S Wear, the head miller and Mr J Paisley, the foreman miller.

Academy Park Flour Mills Montrose In 1902, Montrose could claim to be the most northerly place in the UK that possessed a roller flour mill. Previously there had only been numerous small water mills. The Montrose mill was built by John McKenzie, who in conjunction with Robert Reid, built the Academy Park Mills in 1858. The site chosen was near the docks with a railway loop line connecting the mill to both the docks and the Scottish rail system. 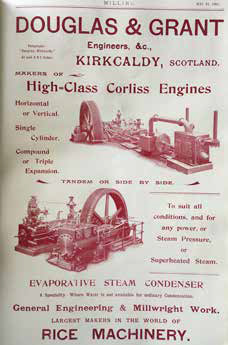 As Montrose had a fine natural harbor, the mill site was well-chosen. From 1858, the mill developed a large milling business as stone millers and in 1887 they decided the time had come for the time-honored burrs to be replaced by a roller system. Henry Simon was chosen to install a complete roller plant. In 1897, following the death in 1889 of the founder of the company, his son, David McKenzie again engaged Henry Simon to re-model the process and introduce a wheat washing and conditioning plant. The mill was driven by new engines and boilers capable of producing 200hp. The engine was compound with cylinders abreast and a flywheel between. It was fitted with high speed governors and automatic cut-off gear and had a condenser. The main drive had seven ropes from the rim of the flywheel. The boiler was by Galloways of Manchester and had two furnaces and thirty-two tubes. It proved very economical as it could bear a high steam pressure. The plant was arranged with four breaks and nine reductions, and had a 34-inch break surface, eight inches of scratch, and 57 inches of smooth for each sack of flour it made. The roller floor was set out with fourteen double Simon heavy pattern mills, each being on breaks and the scratch systems, the rest on reductions.

The purification was done on six Simon dustless machines in three frames and assisting them on the second floor were a double scalper and three grading sieves. The top floor provided standing room for four double, and eleven single centrifugals, and one reel.

The first and second break chops were scalped on a “Manchester” double rotary sieve, and the third and fourth on double centrifugals, one machine for the two first and one each for the last two. McKenzie also ran a whole meal plant consisting of rolls and sifters. As well as the milling business they did a large trade in grain and shipped considerable amounts of barley to the Clyde and other western points, as well as oats to English ports.

The Academy Park Mills were also fitted with a complete provender plant and did a large trade with stock keepers, especially the breeders and feeders of the celebrated Aberdeen Angus cattle.